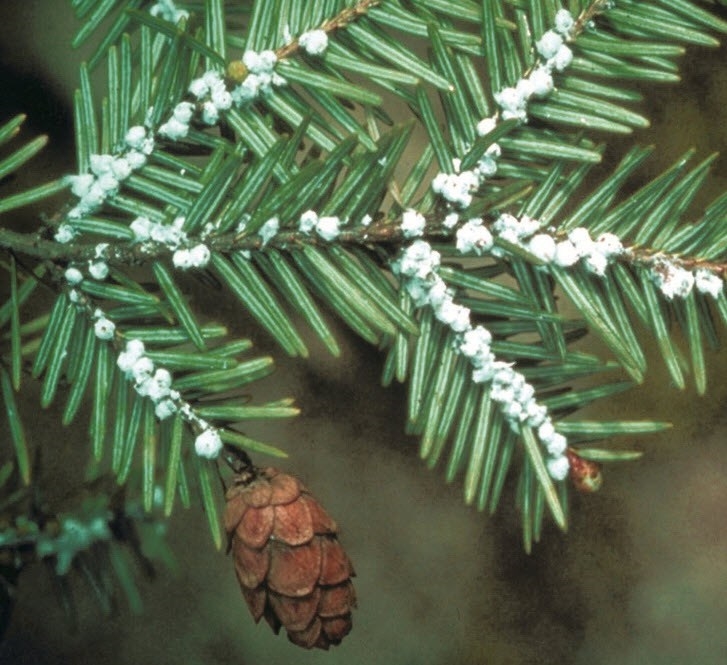 This winter the Conservation District, as part of the North Country CISMA, is teaming up with the Nature Conservancy to complete surveys for Hemlock Woolly Adelgid in Mason County. A random sampling of landowners will be mailed letters this winter requesting permission for our staff to conduct surveys on their property. Please help us by responding to the letter and allowing us to survey. This invasive insect has been found at locations in Oceana County, but has not yet been recorded in Mason County. We hope to keep it that way!

Hemlock woolly adelgid is an invasive insect pest, originally from Japan, that can be seen on Hemlocks by the white woolly masses at the base of the needles. The insect feeds on the sap of the tree, depriving it of nutrients and causing it to die. It is only known to attack hemlock trees, but has caused mass die offs in at least 19 states along the east coast. Hemlocks are a very valuable tree ecologically, providing winter cover for mammals, nesting habitat for certain species of birds and shade cover for streams, helping to keep temperatures down in our cold water streams, improving trout habitat. To learn more, check out this bulletin from MSU Extension: https://www.canr.msu.edu/resources/hemlock_woolly_adelgid_e3300