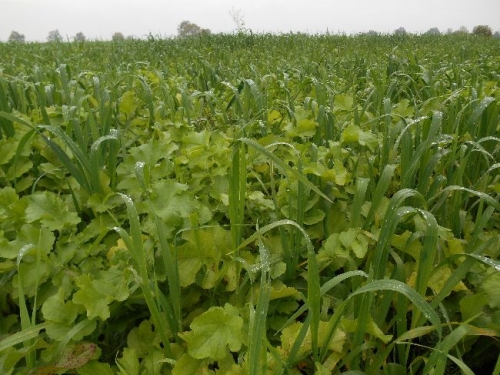 With fall harvest well underway, it is time to think about cover crops. Cover crops are herbaceous plants such as grasses, legumes, and forbs that are planted for seasonal cover. Cover crops prevent erosion by reducing the impactful forces of wind and rain. When soil particles become detached and transported, they can end up in our watersheds, leading to sedimentation of our rivers and lakes. The transported soil particle also leaves behind less fertile ground for future crops. Cover crops can replenish much needed nutrients to the soil if disked into the field; a process called green manure. To go even further, legumes fix nitrogen, making it readily available for the next year’s crop. Leaving at least 50% of the cover crop’s residue can act as mulch and increase available soil moisture. Furthermore, cover crops such as rye and buckwheat have allelopathic chemicals that suppress weed growth.