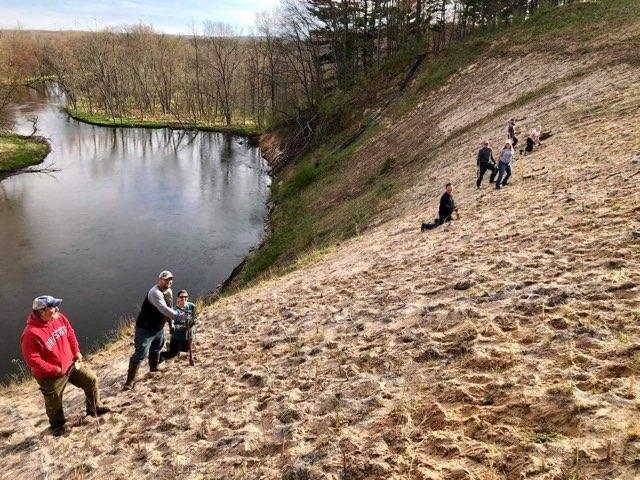 Planting at the Chinnery

Over the last three years, the Conservation District has been working on the monumental task of restoring an old logging era rollaway site called the Chinnery. The Chinnery is a large bank along the Pere Marquette river that was eroding and depositing sediment into the river system. The site was restored by installing rocks at the toe of the bank, reducing the slope, and planting native vegetation on the bank. Unfortunately, some grass that was seeded mid-slope at the time of restoration, didn't survive. In April (2021), the Conrad family (owners of the property) teamed up to remedy this. The Conservation District provided beachgrass plants and the Conrad family installed the plants along the bank where the previous grass planting failed. A total of 10,000 plugs of beachgrass were planted by the Conrads. The plants should establish well in the dry, sandy soil and spread throughout the site, protecting the bank from erosion in the future. Thanks to the extended Conrad clan for all the great work (and photos)!